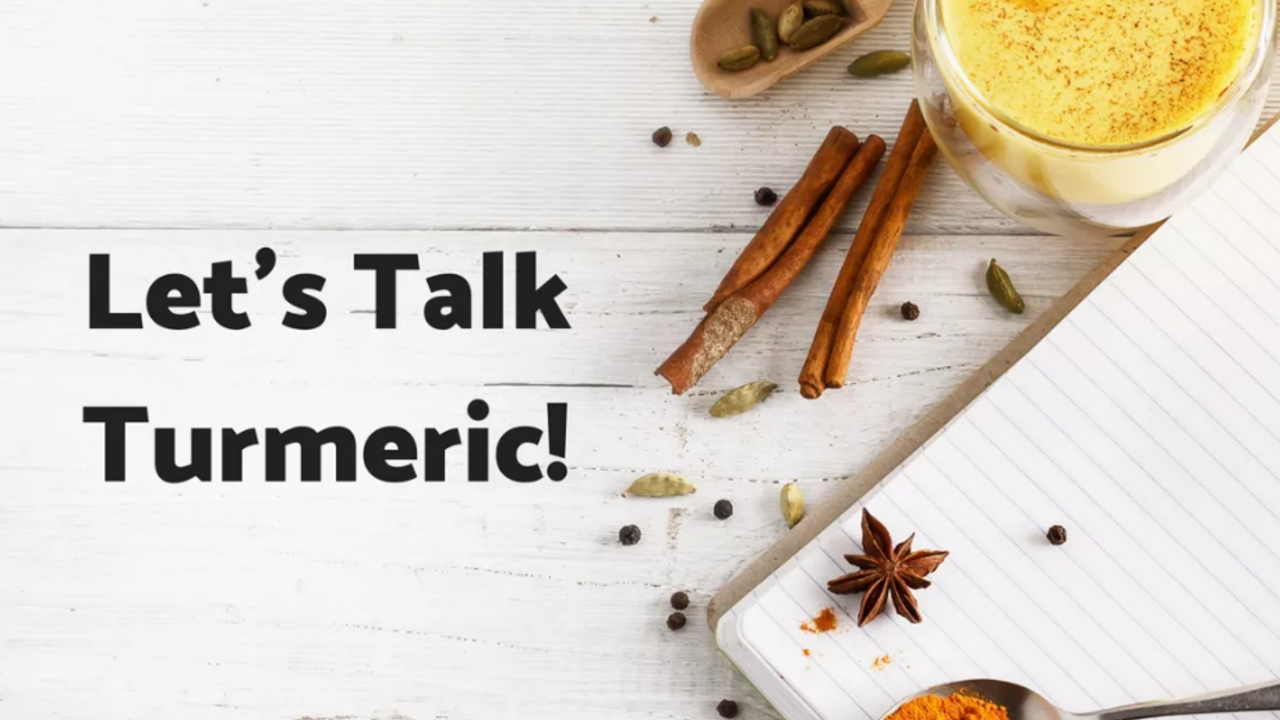 Turmeric has been referred to as the “spice of life” and has become quite the celebrity in the health world, landing many lead roles in our diets!

Probably because this powerful spice has at least 6000 years of documented history as a medicinal agent (*); making turmeric the “Yoda” of spices, filled with years of wisdom. For the last twenty years, scientists have been after its’ wisdom in the form of 6000 peer-reviewed studies (*) which have uncovered some of the reasons for this spices’ popularity.

TURMERIC: BEFORE THE FAME

The first mention of turmeric was in 1280 A.D as a coloring plant. Turmeric initially turned ancient heads due to the plant’s deep yellow color.

This yellow color is due to curcuminoid compounds – most notably Curcumin – the real star in turmeric’s composition. To the ancient peoples, turmeric was not a spice but a dye used for: • Coloring cotton fabric • Calico printing • Dying wool and silk

Turmeric’s coloring talents is what brought it on to the main stage: our plates. It brought vibrant color to most food dishes and served as an early food preservative. Once entering ancient diets its’ many health benefits came to light and became “Oushadhi — the medicinal herb”. Ancient travelers carried turmeric not only for its function as a dye but also as a remedy for: • Wound healing • Skin diseases: leprosy, small pox, chicken pox, ring worm • Stomach issues: flatulence, digestion, heartburn, colic, bloating • Fevers and allergies • Jaundice

Turmeric’s vibrant color found a prominent place in cultures and religions. The Hindus considered turmeric sacred and auspicious, and became a symbol of prosperity, luck, divinity and worship. It was widely used in births as well as religious ceremonies: weddings, funerals, etc. Turmeric had an association to all aspects of life and quickly became associated with “magical powers”(*).

THE SEARCH FOR TURMERIC’S MAGICAL TALENTS:

The first research on turmeric was conducted in 1944 in India. Since then, years of research have uncovered the 3 major sources of Turmeric’s Magic:

1. Anti-inflammatory Turmeric – more specifically – Curcumin exhibited anti-inflammatory properties* in over 800 studies. It has been found to have a similar effect to cortisol and nonsteroidal anti-inflammatory drugs (NSAIDs) without the side effects*. It was seen to decrease the severity of inflammatory bowel disease (IBD), irritable bowel syndrome(IBS)* , colitis, ulcers, and other digestive diseases. As well as improving morning stiffness, walking time and joint swelling in patients with rheumatoid arthritis* to name a few examples.

2. Antioxidant Curcumin has been found to suppress oxidative stress by scavenging free radicals making it a potent antioxidant*. The underlying cause of many degenerative diseases is oxidative damage such as in alzheimer’s and parkinson’s disease*, multiple sclerosis, epilepsy and the list goes on. This offers an explanation to many of turmeric’s benefits. To name a few of the many: turmeric acts as an anti-carcinogen, by not only slowing the growth of cancer cells but also causing their death. It improves the metabolic condition of persons with diabetes and can even promote weight loss*.

3. Antiseptic/ Antibiotic / Antimicrobial / Antifungal Curcumin also exhibits external benefits: Turmeric ointment and topical creams not only protected wounds from infection but also accelerated the healing process*. It also aided in skin diseases such as psoriasis*. Internally, the antibiotic effects of turmeric can help in fighting colds and aid in decongestion*.

If you are looking to cast this spice in your life here are some things to keep in mind:

All the above mentioned benefits seen in Turmeric studies have been mainly conducted on animals and has exhibited low bioavailability* in humans trials therefore:

1. If taking turmeric as a supplement be sure to look for piperine in the ingredients as it increases absorption by 2000%*

2. If using a topical cream be sure to look for bromelain* in the ingredient list as it enhances the absorption and anti-inflammatory effects of curcumin

3. If enjoying turmeric in a meal or a beverage be sure to either:

A. Add a Fat : like coconut milk or olive oil to preserve curcumin in its free form and lower the risk of it being digested too quickly.

B. Heat it up: Whether you are boiling it in water for a tea or sautéing it with your meal – the heat will activate the compound.

Before introducing this new spice into your life always consult with your Doctor. Since too much of something isn’t always a good thing, individuals taking blood thinners, NSAIDs, hypotensive drugs, antacids, diabetes medications and more might see too much of an effect and cause complications.